Pedaling Squares Through a MAMIL’s Life is a Youtube Channel about endurance sports, from a Master (er, middle-aged) Athlete’s perspective.  My focus is that of a MAMIL or a middle-aged man in lycra.

It is February.  December and January tend to be about setting racing and fitness goals – usually from the comfort of our couches. February through November (if you race cyclocross) is about execution.  But if you don’t have A PLAN to execute, you are never going to achieve those goals.  And goals are very, very individualized.  If we had the engine to race at the World Tour level, we would know that by now.

Endurance sports are about rounding us out as busy people with spouses, children, jobs, and extended families.  Our goals should reflect that reality.  Most of us did not race the World Tour (or compete in other professional sports), but we should still chase a dream or two outside of work and family life.

What is the best way to realize those athletic dreams?  Hire a Coach!

A Coach will individualize your training program, tailor that program to your goals, and mentor you along the way to achieving them.

You can find Peter’s coaching website here and his blog here.

Please enjoy an hour or so of our conversation about structured training, improving fitness as a Masters’ Level Athlete, and achieving individual goals in Episode Three of Pedaling Squares Through a MAMIL’s Life.

I will get to the typo but allow me to set the stage.

Too Close for Comfort

Most, perhaps all of us, have been on the receiving end of a “punishment pass” where a motorist intentionally violates your three-foot buffer provided by KRS 189.340(2)(a).   Regardless of intent, ANY violation of our three-foot buffer is always disconcerting and sends off alarm bells in our central nervous system releasing a cascade of hormones that leaves us simultaneously fearful and enraged.

So the question is: how much roadway or “lane” is necessary for a cyclist and motorist to “share” a lane?  I present this as a technical question and in terms of best practices for safe riding – they are two different things.

Ten Pounds of You-Know-What in a Five Pound Bag

When a one hundred and two-inch maximum width truck, trailer or bus passes a thirty-inch-wide cyclist (the AASHTO/American Association of State Highway and Transportation Officials design standard), the three-foot buffer required by KRS 189.340 cannot be technically maintained in a fourteen-foot lane.

On the other hand, a small SUV, such as a Ford Escape or Honda CR-V, are seventy-two to seventy-five inches in width, which would add another two feet of buffer to KRS 189.340’s three-foot buffer within a fourteen-foot lane. But that does not mean it is safe to pass a cyclist in that scenario.

Kentucky’s Administrative Regulation 601 KAR 14:020, Section 7, Operation of Bicycles, contemplates the scenario where a cyclist is riding on a lane that is too narrow to be considered a “shared lane.”:

(3) A bicycle operated in a highway lane with other vehicle types shall keep to the right unless:

(a) Preparing for and executing a left turn;

(b) Passing a slower moving vehicle;

(c) The lane is too narrow to be considered a shared lane. A bicycle may be ridden far enough to the left to prevent overtaking vehicles from attempting to pass in the same lane[.]

Many safe cycling advocates will refer to this as “taking the lane” where the cyclist rides in the center or just left of the center of the lane to prevent a motorist from passing within the same lane.  This is in fact safer for the cyclist.  KRS 189.340(2)(b) permits passing the cyclist left of center in this scenario:

(b) The driver of a motor vehicle may drive to the left of the center of a roadway, including when a no-passing zone is marked in accordance with subsection (6) of this section, to pass a person operating a bicycle or electric low-speed scooter only if the roadway to the left of the center is unobstructed for a sufficient distance to permit the driver to pass the person operating the bicycle or electric low-speed scooter safely and avoid interference with oncoming traffic. This paragraph does not authorize driving on the left side of the center of the roadway when otherwise prohibited under state law.

Back to that Typo 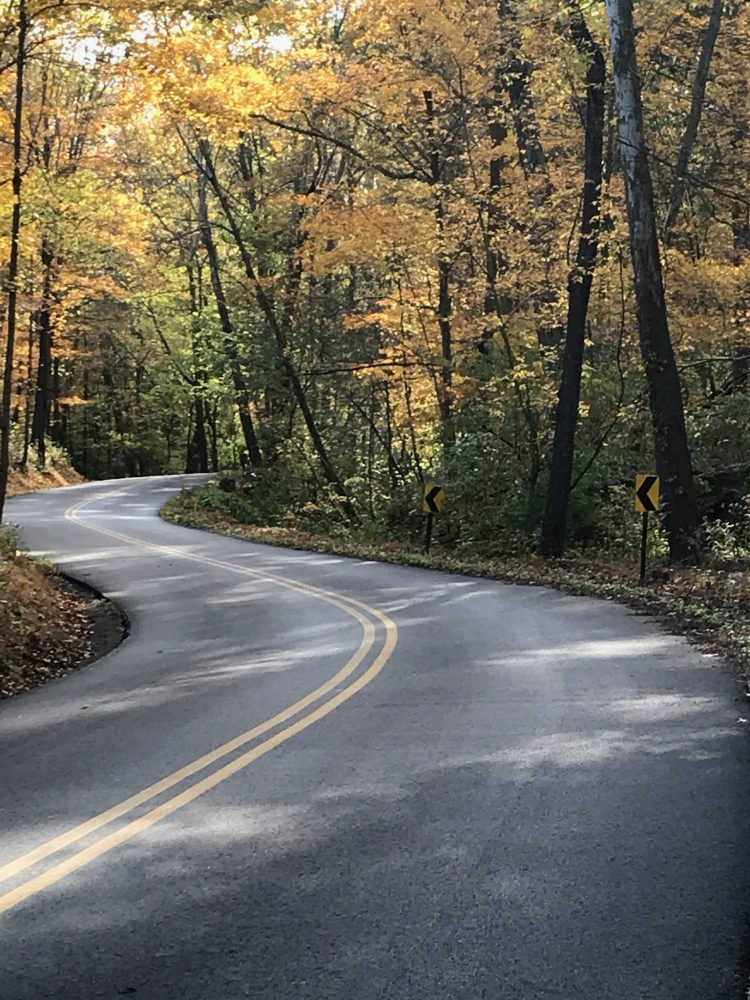 So, where is that typo and why is it important? Because “taking the lane” is akin to a self-defense argument in that “taking the lane” is an affirmative defense that must be proved at trial. The administrative regulations contemplate that a cyclist will “keep to the right.” Taking the lane in a roadway that is “too narrow to be considered a shared lane” is the exception, not the rule. Just like refraining from assaulting someone is the rule unless you are acting in defense of yourself or in defense of someone else. In Court the defendant must prove the exception. This is what judges and lawyers refer to as an affirmative defense.

In taking the lane, the cyclist may be required to prove in Court that the lane was too narrow to be a shared lane.

“Shared lane” means a single lane of traffic less than fourteen (14) feet in width not including the gutter pan.

I need to give some attribution here.  The typo at the heart of this blog came to my attention at Cincinnati Cycling Club’s Annual Banquet last month.  Jim Lindner, a fellow cyclist, and Director of Safety and Education for CCC raised the issue with me. I have always glossed over two important words – “less than” and simply focused on “fourteen feet in width” as we all know that is the minimum width of lane that can accommodate a cyclist (thirty to forty inches wide) and a Honda CRV (seventy-five inches wide).  30 inches + 75 inches = 105 inches or 8.75 feet, which is less than 14 feet.

Perhaps the authors of 601 KAR 14:020 intended to define a shared lane, as a single lane of traffic greater than fourteen (14) feet in width, not including the gutter pan as such a lane could technically “share” a Honda CRV and a thirty-inch-wide cyclist with space to spare after a three-foot buffer.

Effect of the Typo?

One must keep in mind that the definition of a “shared lane” comes up in Kentucky’s Administrative Code, not Kentucky’s Revised Statutes.  The regulations are just that, regulations.  They do not have the force of law of the Revised Statutes, which are the laws of the Commonwealth passed by the Legislature.

The most likely scenario where “taking the lane” will come up is in a local traffic court.

In legal-speak, KRS 189.340, is Enabling Legislation. In KRS 189.287, which was entitled “Bicycle Safety Regulations and Standards,” the Legislature “enabled” the “Transportation Cabinet [to] promulgate[] administrative regulations[.]”

KRS 189.287 does confer a very limited benefit on cyclists who follow the regulations:

“Bicycles and riders which comply with the regulations promulgated under this section are exempt from municipal and other local government regulations concerning safety equipment but not method of operation.”

“Taking the lane” would likely fall under “method of operation”, so a cyclist would not be exempted from municipal or local regulations. Regardless, if a cyclist was charged with impeding traffic or failing to keep to the right under a municipal code or local regulation/ordinance/code, we could cite 601 KAR 14:020 in that cyclist’s defense in traffic court. However, we would have to explain the little typo in in 601 KAR 14:020’s definition of a shared lane.

The League of American Bicyclists offers the following model law:

A person operating a bicycle upon a roadway at less than the normal speed of traffic shall ride in the right hand lane of the roadway subject to the following provisions:

A person operating a bicycle may use a lane other than the right hand lane when:

Overtaking or passing another vehicle proceeding in the same direction;

Preparing for a left turn at an intersection or into a private road or driveway;

Reasonably necessary to avoid conditions, including, but not limited to, fixed or moving objects, parked or moving vehicles, bicycles, pedestrians, animals, surface hazards or lanes that are too narrow for a bicycle and a motor vehicle to travel safely side by side within such lanes;

Approaching an intersection where right turns are permitted and there is a dedicated right turn lane, in which case a bicyclist may ride on the left-hand side of such dedicated lane, even if the bicyclist does not intend to turn right;

Riding on a roadway designated for one-way traffic, when the bicyclist may ride as near to the left-hand curb or edge of such roadway as judged safe by the bicyclist; or

A person operating a bicycle shall not be expected or required to:

Ride over or through hazards at the edge of a roadway, including but not limited to fixed or moving objects, parked or moving vehicles, bicycles, pedestrians, animals, surface hazards, or narrow lanes; or

Ride without a reasonable safety margin on the right-hand side of the roadway.

A person operating a bicycle in compliance with this section and not violating any other section of law is not impeding traffic.

The foregoing language achieves two important ends: (1) the judgment regarding safety is in the hands of the cyclist and (2) the width of a shareable lane is not a predetermined figure.

The realities of “Taking the Lane” often result in obnoxious horn honking, unpleasant hand gestures, and grumpy motorists. Cyclists in Kentucky would be well-served with better signage, especially on single-lane roads that cyclists share with motorists. Better signage would protect cyclists and potentially diffuse angry encounters with motorists.

For example, the State of Delaware contemplates signage that permits cyclists to “Take the Lane” in a shared lane scenario:

The Bicycles May Use Full Lane (R4-11) sign (see Figure 9B-2) may be used in Delaware on designated bicycle routes where no bicycle lanes or adjacent shoulders usable by bicyclists are present and where travel lanes are too narrow for bicyclists and motor vehicles to operate side by side.

The Bicycles May Use Full Lane sign may be used in locations where it is important to inform road users that bicyclists might occupy the travel lane.

Section 9C.07 describes a Shared Lane Marking that may be used in addition to or instead of the Bicycles May Use Full Lane sign to inform road users that bicyclists might occupy the travel lane.

The authoritative and widely recognized Manual on Uniform Traffic Control Devices for Streets and Highways contemplates signage that permits cyclists to “Take the Lane” in a shared lane scenario:

From an advocacy perspective, a sign can reduce a topic that merits almost two thousand words in this blog article down to just four words!

The Kentucky Administrative Regulation and the Model Law text above both address criminal or traffic violations for “impeding” traffic. However, they can be even more important than avoiding a fine or traffic conviction. Regulations, the Kentucky Revised Statutes, and Model Laws can be the basis for jury instructions when the stakes are much, much higher – in a personal injury or wrongful death lawsuit where a cyclist is injured or killed.

If you or anyone you know is charged in Kentucky with impeding traffic or failing-to-keep-right in a municipal or local traffic court, we are here to help. Should a typo keep you from “taking the lane” where the lane is narrow? No.  Safety first!  If you find yourself in Traffic Court? That’s what lawyers are for. You can find me at [email protected]. Or by phone at 859 380 8309 and 513 600 8432.