Last week we went over the amendments to Ohio Uninsured/Underinsured Motorist Statute which were incorporated into Ohio law in 1994 and 1997.  Several more amendments would unfold only three years later in 2000 and then again in 2001.  This article will put the more significant changes into some context for Ohio insureds.  Next week we will discuss the impact of those changes on the rights of cyclists and pedestrians in Ohio.

The foregoing amendment prohibits a claim between family members or a driver that was using a household vehicle as a guest or as a friend.

Please recall that last week I “scored” the 1994 and 1997 amendments as pro-insurer, pro-insured or neutral.

I would score Change #1 as pro-insurance companies.  Change #1 above reduced the number and type of drivers against whom a UM/UIM claim may be asserted.

I would score Change #2 as neutral as Change #2 eliminated an insurer’s obligation to offer UM/UIM Coverage with the renewal of an automobile insurance policy where UM/UIM coverage had been declined in writing.  As a matter of personal opinion, if a party declined a certain type of coverage in writing, it should be up to the citizen to ask for it if he/she changes his/her mind.  Insurance companies should not have to act like parents and remind insureds of rights previously relinquished.

The 2001 Amendments went a step further and completely eliminated an insurer’s obligation to offer any UM/UIM coverage to its insureds.  R.C. 3937.18 received a significant revision to subsection (A).  Prior versions of R.C. 3937.18(A) required that no automobile liability or motor vehicle liability policy of insurance . . . shall be delivered [in Ohio] unless [UM/UIM] coverages are offered to persons insured under the policy[.]”  That mandatory language, subject to written rejection, was deleted in favor of permissive “may, but is not required to include uninsured motorist coverage, underinsured motorist coverage, or both uninsured and underinsured motorist coverages[.]”

I would score this as a pro-insurance companies amendment.  Not all insureds know or appreciate the value of UM/UIM coverage.  Most states require some level of minimum coverage for third-party claims.  The same reasoning applies to UM/UIM coverage.  If we, as a State, believe it is important to have some modest level of insurance in place to address the impacts of careless driving, that reasoning applies with equal force to third-party claims as it does to first-party UM/IUM coverage.  The result is the same – we are assuring coverage where a careless driver flaunts his or her legal obligation to obtain automobile coverage.  Think of it as a belt-and-suspenders approach.

The statute redefined or collated the definition of an uninsured motorist under new subsection B: 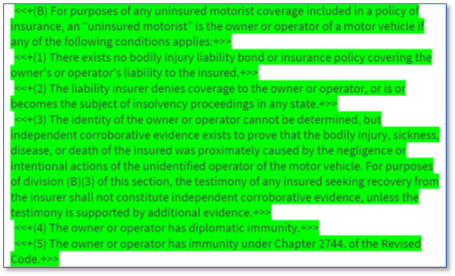 The new subsection B also defined what an uninsured motorist was not:

I would score these changes as neutral.  The new subsection B codified previously recognized categories of uninsured motorists.

2001 Change #3: Reminder That Claimant Has to Prove His/Her Claim

The statute was revised to include a legal truism in new subsection D:

Again, I would score the foregoing change as neutral.  The Ohio legislature was simply codifying contract principles regarding who was an uninsured/underinsured motorist and tort principles of proximate causation

Current subsection H was added to permit the addition of provisions setting forth a three-year claim limitation period in UM/UIM coverage:

This amendment is often misunderstood in the insurance industry as a Statute of Limitations of three years.  This is not the case as Ohio Courts recognize UM/UIM Claims as contract claims, not tort claims.  Contract claims have a much longer statute of limitations – six years. On June 16, 2021 the Ohio Legislature reduced the statute of limitations on a written contract action to six years.  R.C. 2305.06 now reads as follows: “Except as provided in sections 126.301, 1302.98, 1303.16, 1345.10, and 2305.04 of the Revised Code, an action upon a specialty or an agreement, contract, or promise in writing shall be brought within six years after the cause of action accrued.”

“[I]n the absence of a controlling statute to the contrary, a provision in a contract may validly limit, as between the parties, the time for bringing an action on such contract to a period less than that prescribed in a general statute of limitations provided that the shorter period shall be a reasonable one.”

This is definitely a pro-insurance company change.  Without it, an Ohio citizen would have six years to make a claim.  The foregoing amendment permits insurance companies to sneak a shorter three-year limitation for making a claim into their UM/UIM policies.

Next week I will discuss the practical implications of pro-insurance company changes to UM/UIM law to cyclists and pedestrians in Ohio.  Should you have any questions or comments in the interim, I can be reached at [email protected] or 513 600 8432 or 859 380 8309.