My new friend and fellow Cyclist, Gary Davis is the Community/Governmental Relations Liaison for Indiana Trails.  Gary recently reached out to me about the new Interstate 69 Bridge which plans to span the Ohio River at Evansville, Indiana and Henderson, Kentucky.  You can find the Indiana Trails website’s discussion of the Project here.  Why did Gary reach out to me?  You guessed it – there is NO PROVISION FOR BICYCLE OR PEDESTRIAN TRAFFIC in this new Project!!!  The only current access for cyclists and pedestrians from Henderson, Kentucky to Evansville, Indiana are the US 41 Bridges which have no protected lanes in either direction.  So the Project currently removes the only unsafe passage (two US41 Bridges) between the states and replaces it with one even more unsafe US 41 Bridge with traffic in both directions and no plans for protected lanes for cyclists and pedestrians.

Evansville-Henderson has two existing U.S. 41 bridges–both of which have been declared patently unsafe for non-motorized travel by the Interstate-69 Bridge project managers.  The latest plan is to demolish one of those bridges and keep the other for non-tolled local auto traffic when the new I-69 bridge is opened.  There is currently no plan to safely accommodate bicyclists or pedestrians on the proposed new I69 Bridge or the old US 41 Bridge.

From Evansville-Henderson, the nearest safe crossings of the Ohio River for anyone but the most experienced or daring cyclists are Louisville-Jeffersonville to the east (121 miles/three bridges) and the Cave-in-Rock Ferry in Southern Illinois-Western Kentucky (75 miles).

Kentucky Cyclists and Indiana Cyclists must have their voices heard.  Please consider lending your support to their efforts to secure safe passage from one state to another by signing the petition for safe passage on the proposed I69 Bridge linked below.  You can also write Governors of Indiana and Kentucky with proposed letters which are also linked below. 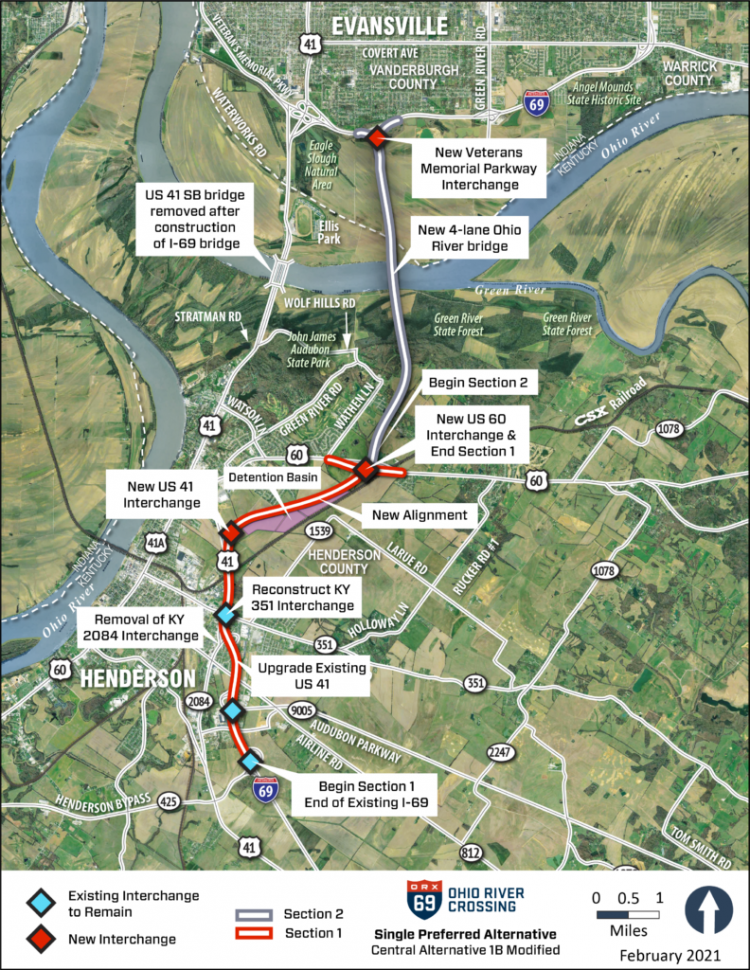 The Interstate 69 Bridge got me thinking about cycling in Northern Kentucky and Southwestern Ohio.  For most of my adult life, I have taken getting across the Ohio River on my bike for granted.  The Ohio River between Northern Kentucky and Cincinnati averages one mile in width and averages 24 feet in depth which basically eliminates the get-a-couple-soakers-and-wade-across-option for cyclists.

Not only have I taken the dry passage across the Ohio River for granted, it occurred to me that we have an embarrassment of riches in Northern Kentucky when it comes to river passage by bike.  We have no less than four bridges that allow for bicycle and pedestrian traffic.

Heading from East to West, the first and safest bridge for cyclists and pedestrians is the Purple People Bridge (aka The “C&O” or Chesapeake & Ohio Bridge) located in Newport which has no vehicular traffic; the second is the Taylor Southgate Bridge with protected lanes on either side; the third is the John A. Roebling Suspension Bridge located in Covington which has protected lanes on either side; and the fourth is the Clay Wade Bailey Bridge which has a protected lane on the east side of the bridge.  If you want to take a step back in time, you can cross the Ohio River from Kentucky to Ohio via the Anderson Ferry to the west and the Augusta Ferry to the east of Northern Kentucky.

I have been able to combine old (the Augusta Ferry) and new (Purple People Bridge) transportation technology to create a beautiful 125-mile route that crossed the Ohio River at two locations: 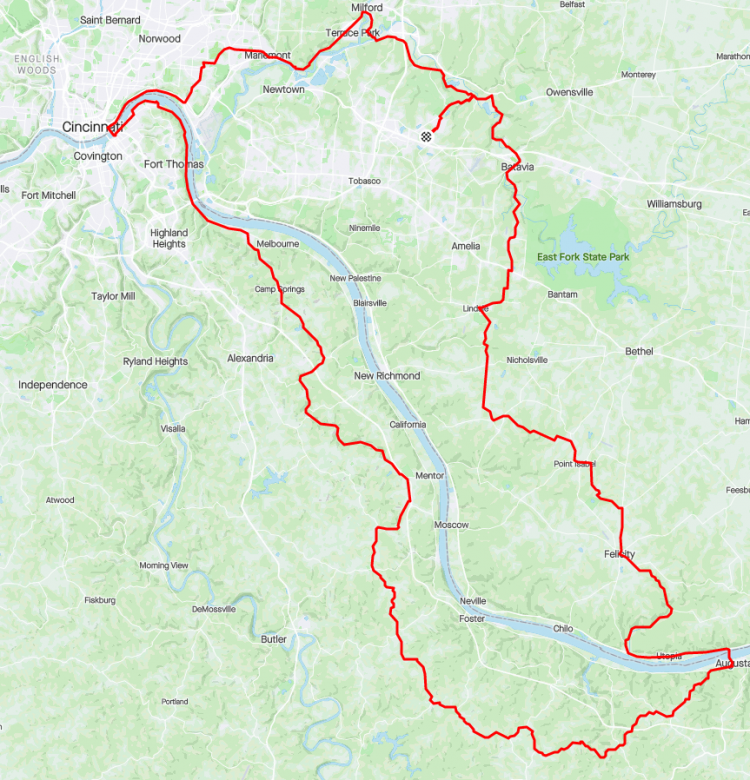 But you do not need to go on a Century Ride to appreciate the value of pedestrian and bicycle access on bridges.  Both sides of the Ohio River have seen increased development.  It is a typical occurrence for Reds Fans to grab a beer at the Hofbrauhaus in Newport, Kentucky, and take the Purple People Bridge to Great American Ballpark.  All of the dining options in Covington, Kentucky are connected to Cincinnati’s Smale Riverfront Park by the Roebling Suspension Bridge.  Both sides of the Ohio River’s economies are enhanced by pedestrian access on these bridges and folk’s quality of life is undoubtedly enhanced by the parks and trail systems connected by these bridges.

Other cities with pedestrian and bicycle access to bridges have experienced the same benefits.  The Ben Franklin Bridge Pedestrian Walkway in Philadelphia, Pennsylvania spans the Delaware River and provides bridge access between Pennsylvania and New Jersey.  Minneapolis and Saint Paul, Minnesota boast 23 bridges with pedestrian and bicycle access!  Pictures and the history of those bridges can be found here.

Interstate bridges like the new Quad Cities Interstate-74 Bridge over the Mississippi River between Illinois and Iowa should be a model, not an exception for providing protected travel for cyclists and pedestrians.  Our friends at Indiana Trails provide us with the following list of bridges across America that provide similar pedestrian and bicycle access.

The population of the Evansville-Henderson metro area is approximately 300,000.  Evansville has an advanced and expanding trails/greenway system.  Southwest Indiana and Western Kentucky are home to dozens of major parks, forests, lakes, and tourism amenities, and have the American Discovery Trail, the Bicentennial U.S. 76 Bike Route and a planned added north-south U.S. Bicycle Route.

New USDOT Secretary Pete Buttigieg says transportation safety is his number one concern.  The I-69 Bridge, with its use of federal funds, is a good place to start.

What can you do?

The stakeholders for this project need to know that the cycling community supports bike and hike accommodations to the new bridge project between Evansville, Indiana, and Henderson, Kentucky.  There are several ways you can help out:

Write a letter to the Governors of Indiana and Kentucky.