In Ohio, you are not impeding traffic presuming that you are operating your bicycle at or near its maximum speed.

(A) No person shall stop or operate a vehicle, trackless trolley, or streetcar at such an unreasonably slow speed as to impede or block the normal and reasonable movement of traffic, except when stopping or reduced speed is necessary for safe operation or to comply with law.

“Vehicles” are broadly defined in Ohio.  Pursuant to R.C. 4501.01(A), a “vehicle means everything on wheels or runners, including motorized bicycles, but does not mean electric personal assistive mobility devices, vehicles that are operated exclusively on rails or tracks or from overhead electric trolley wires, and vehicles that belong to any police department, municipal fire department, or volunteer fire department, or that are used by such a department in the discharge of its functions.”

Bicycles are defined by R.C. 4501.01(K) as “every device, other than a device that is designed solely for use as a play vehicle by a child, that is propelled solely by human power upon which a person may ride, and that has two or more wheels, any of which is more than fourteen inches in diameter.”

No person shall stop or operate a vehicle at such a slow speed as to impede or block the normal and reasonable movement of traffic, except when stopping or reduced speed is necessary for safe operation or to comply with [the] law. 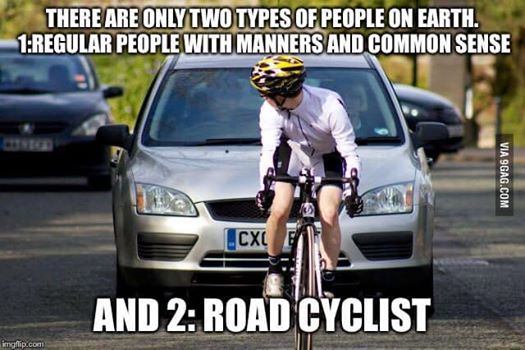 Mr. Selz was convicted of this offense in Traffic Court.  Fortunately for Mr. Selz and Cyclists in Ohio, he was capably represented by my friend and colleague, Steve Magas.  Section 333.04(a) of the Trotwood Municipal Code could not be fairly read to prohibit any bicycle on an Ohio roadway.  Steve argued, with success, that Mr. Selz was operating his “vehicle” (also known as a bicycle) at the maximum speed at which he could possibly operate his bicycle – 15 mph uphill!

Steve analogized Mr. Selz’s operation of his bicycle to that of an operator of a corn combine in a prior case, where that court found: “The corn combine, was traveling at or near its highest possible speed. To permit the jury to impose liability on the basis of the speed of the combine would be tantamount to a holding that the operation of farm machinery such as appellants’ on the public roadway typically constitutes negligence per se. We cannot endorse such a holding. Title 68A [of the Georgia Code] does not exclude farm machinery from the public roads.”

(C) In a case involving a violation of this section, the trier of fact, in determining whether the vehicle was being operated at an unreasonably slow speed, shall consider the capabilities of the vehicle and its operator.

So the moral of the story in Ohio is that a Cyclist will not be impeding traffic if he or she is operating their bicycle at the upper end of their capabilities, which may beg the question of what that particular Cyclist’s capabilities were in the first instance.  A professional cyclist’s “capabilities” going uphill on a roadway will be much different than a weekend warrior’s capabilities.  These are arguments that may fall on deaf ears as you are issued a citation by a police officer but may find a receptive ear by a municipal or state court judge or a jury of your peers if that matter goes that far in the justice system.

Kentucky Cyclists do not face similar exposure to criminal convictions.

A person shall not drive a motor vehicle at a speed that will impede or block the normal and reasonable movement of traffic, except when reduced speed is necessary for safe operation or in compliance with law.

Like Ohio, vehicles are broadly defined in Kentucky.  A bicycle will be considered a “vehicle” under the Kentucky Revised Statutes as a bicycle is an “agency” for ”the transportation of persons over or upon the public highways of the Commonwealth.”

1. All agencies for the transportation of persons or property over or upon the public highways of the Commonwealth; and

2. All vehicles passing over or upon the highways.

(1) The slow-moving vehicle emblem shall be restricted to the uses specified herein and the use on any other type of vehicle or on other objects is prohibited.

So the short answer to the pending impeding question is: Cyclists in Ohio are broadly defined as vehicle operators and may be subject to prosecution for impeding traffic, but a good lawyer should be able to “get you off” (because you were innocent in the first instance) pursuant to Trotwood v Selz (2000 2nd Dist.), 139 Ohio App.3d 947 and subsection C of R.C. 4511.22 arguing that you were pedaling within your “capabilities”; and Cyclists in Kentucky should not be charged in the first instance because the impeding traffic statute, KRS 189.390(7), is narrowly limited to motor vehicles, not all vehicles.